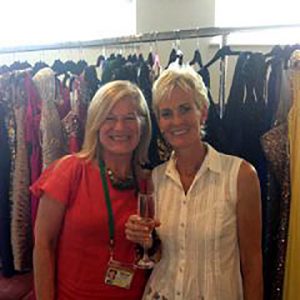 There is an “Aladdin’s cave” at Wimbledon where the stars choose from hundreds of designer dresses, shoes and accessories for the Champions Ball.

On the last day of the tournament, one of the rooms inside Centre Court is transformed into a designer boutique for the champions, runners-up and their families.

Andy Murray’s mother Judy, above, was “unprepared” for the ball last year but said: “You’re there in your jeans watching the final and then in two hours’ time you have to be at the Wimbledon Ball. You go down to the locker room and there’s this Aladdin’s cave of clothes and shoes and accessories and hair stylists, it’s all there.”

Elisabeth Piner, right with Mrs Murray, has been the Wimbledon dresser for 20 years. She said “I have some really special dresses this year by some great designers but I can’t reveal anything until Sunday.”